Daniel Andresen is an Antwerp-based fashion designer. He studied at Antwerp's internationally acclaimed institute, The Royal Academy of Fine Arts.

After graduating with a masters degree, Andresen decided to explore his fascination with knitwear and its infinite possibilities. His consequent move to Hamburg earned him a position in heading up both knitwear design as well as production.

A desire to expand on his knowledge of this niche industry, led to Andresens return to Belgium. Here, he undertook an internship with Hilde Frunt and Sigi where he focused on developing new knits and perfecting the design process.

2009 marked the beginning of his career when he was invited to present his first menswear collection under his own label in Paris, in collaboration with RA showroom. For his second collection he decided to expand his repertoire with the introduction of womenswear.

His work is inspired by subgenres of rock music, sci-fi and post-apocalyptic action films and sports, namely bmx stunt riding and skateboarding and the dialogue of imagery that these create. But it also carries a lot of elements from numerous travels like the serenity of the sea and the creepiness of the desert.

An enthrallment with animal bone structures and their organic shapes is especially evident in his use of three-dimensional spheres, juxtaposed by the structured lines of his patterns.
Daniel combines al these elements with an appreciation of fine yarns and high quality leather.
This results in a refined brutality, attracting an atmosphere of subtle intimidation. The collection is complex, but has the most humble appearance. 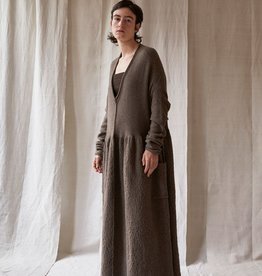 Starting from yarn Daniel Andresen is known for his authentic knitwear. Every piece is a unique treasure reflecting the authenticity of his knitwear.
Daniel Andresen CLARKIA DRESS
$2,118.00 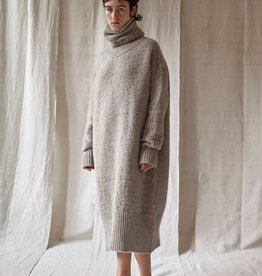 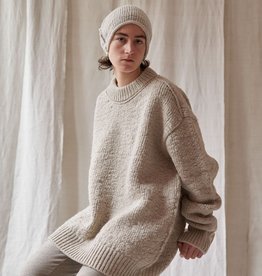 Starting from yarn Daniel Andresen is known for his authentic knitwear. Every piece is a unique treasure reflecting the authenticity of his knitwear.
Daniel Andresen FREESIA SWEATER
$1,445.00